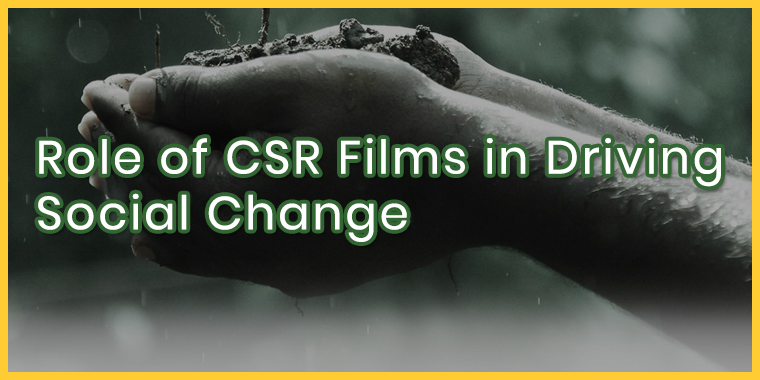 A smile on a kid’s face is the most hear warming sight, but when you get to know that you’re the reason behind that smile; it makes your day.

We, Humans have always cherished feelings of love and care over all the other emotions. No matter how hateful, mean or arrogant we might become we can never shed our core away, the one which likes to spread happiness. Sometimes we forget this but even then, all we need is someone or something to remind us of our true identity and our inherent virtues.

CSR has helped organizations in sharing such smiles, in giving back, creating a positive impact on the society and bringing about an environmental change. They took CSR as opportunity to serve people and help in community building. The fact that makes it a charm is that, as a policy it has risen above being a mandatory regulation to becoming a voluntary enterprise. More and more companies are willing to pool in a large chunk of their resources for making the world a better place. We’re finally at the stage where for corporations, SUCCESS and SOCIETY are equally important, where EFFICIENCY and EMPATHY are equally critical, where PROGRESS AND PEOPLE are indistinguishable.

“Spending on Corporate Social Responsibility (CSR), or welfare schemes like health and education, by India’s largest firms stood at Rs7,536.30 crore (around $1 billion) in the financial year that ended in March 2018, according to a survey by KPMG India. The survey analysed the CSR spending of India’s top 100 listed companies. The CSR spending by top Indian companies in 2018 was 47% higher than what it was back in 2014 when India first made it mandatory for large private and public sector firms to spend at least 2% of their net profits on special development projects.'-Source https://qz.com/india/1508321/how-indian-companies-spend-on-csr/

The reason for the success of CSR initiatives and their positive impact on the people is the approach with which the businesses fulfill them. They understand that the problems change. Not only the problems change but the people change as well and the organizations are more than willing to adjust and adopt measures needed in this ever-evolving environment. Hence over the years methods of performing CSR have diversified and evolved.

A CSR film is a fairly new concept but in a short span of time it has become very popular. More and more companies are showing their interest towards CSR films because they realize the potential the medium has and the power it commands in bringing tectonic social changes. Stakes on CSR films are rising, and CSR filmmakers like, the Visual House step up to the cause, and deal with this ginormous task by pushing the boundaries and using the medium to fulfil various objectives like:

CSR Films have time and again proven to be the best medium for spreading awareness. Being an audio-visual medium, it gains the attention of people. A narrative driven CSR film makes it even more interesting, for it becomes relatable and the viewer becomes a part of the story. In most of the awareness programs it is important to present a “cause and effect” relationship (on the matter at hand), and no medium can do this better than films. Most of all it serves as a treat for the viewer because they have the pleasure of watching a story and yet receive the core message. https://www.youtube.com/watch?v=OSb5afmesJQ -Hindustan Unilever in this video with a story of a shower in a village, very simplistically inform us about the importance of water.

CSR films play a great role in educating the masses about different issues and also help them with the solutions. By the means of CSR film an organization can reach a large number of people and provide them with step by step guidance without being physically present. CSR films are effective when it comes to education because of its nature of being visual where step by step guidance is provided for the problem, this is a great help to those who are not adept in reading or comprehending arduous jargons.

CSR films can also be used to invoke the sensibility and generosity of viewers. In a CSR Film the viewers can be requested to contribute to a cause. The film puts the viewers in a space where they can empathize with the victim of certain circumstance and in turn help them. In this way the company not only fulfills their own duties but also takes a decision to step up and create a feeling of community amongst the people, where they contribute and help each other. They inherently emphasize on the fact that we should together look after each other, because behind the individuality of a person lies the cooperation and acceptance of a large society, the one to which everyone owes a debt. Example: https://www.youtube.com/watch?v=99QMldUh1zk- Zee media initiative for helping Kerala during massive floods in 2018.

FILLING THE STAKEHOLDERS WITH PRIDE:

CSR needs to address the well-being of all stakeholders. The stakeholders of a company are the reason why the company exists. These stakeholders include a large pool of people, ranging from suppliers to customers and; employers to employees, every person that has even a distant link to the business and affects or contributes even in the slightest of terms is a stakeholder, and their well-being is the responsibility of the business. But the well-being of stakeholders cannot be measured only in monetary terms for the inner moralistic satisfaction of these stakeholders is just as important. When a CSR film is made which enumerates the activities conducted by the organization for the welfare of the people, it fills the stakeholders with pride. This not only makes them happy, but acts as a great motivator and boosts their morale. In this way the organization keeps the spirit of the business alive, where every stakeholder feels that they have served a larger cause and have collectively contributed to the progress of the society.

https://www.youtube.com/watch?time_continue=202&v=MoHeBnuVg5I- CSR film on the P&G flagship Shiksha program gives meaning to each and every person who is a stakeholder in the company.

The reason why a CSR film works better than various other mediums is because of the science and psychology behind it.

It makes information entertaining Anything that is informative in nature is presumed to be boring and distant. This makes spreading awareness and education a difficult task. People have become immune to classical means of spreading information like brochures, pamphlets, classes, etc. But a film is able to solve all of this because it’s attractive and catchy, has a narrative, provides a fulfilling sensation and hooks a person till the end.

Standardized, exact interpretation A CSR film is like a product, that will remain identical throughout and will not be misinterpreted. When it comes to communicating with the people an organization needs to be very particular about the message it sends across for there is no place for mistakes. The ideology of the company should reach the people without any alteration. This can be taken care of with a CSR film. When employees or company representatives are sent to various parts of the country to communicate it is quite possible for them to make mistakes while delivering the concept or the ideology, and accidentally give a message that is different from that of the organization. Whereas, if a CSR film is used, general human errors can be avoided and the precision can be achieved in delivering the required message in the most effective manner.

Reduces Human Cost Hiring employees and sending them to the interiors can be expensive and dangerous. With an increasing cable and internet penetration, these problems can be easily avoided with a CSR film. This process saves money which can be used in other social projects and keep employees away from danger.

Vast Reach As mentioned earlier, CSR films have the potential of reaching various regions and covering a lot of people. They are even liked and shared. With more and more people interested in Video content, a CSR film can spread like wild fire. A good CSR film has the potential of being shared by millions.

It is more than evident what a CSR film can achieve but it is not a simple task. It involves craft and expertise. We, The Visual House as an organization believe in the power of CSR films and have been using our technical capabilities in projecting the same. As an Exclusive CSR filmmaking organization, we have always used the perfect mix of technology, story and innovation in our CSR films wherein we make all the efforts needed to bring forth a change in the most revolutionary manner. We know that the organizations want to create a better world and we are here to help in doing so.

“You give but little when you give of your possessions.

It is when you give of yourself that you truly give.”